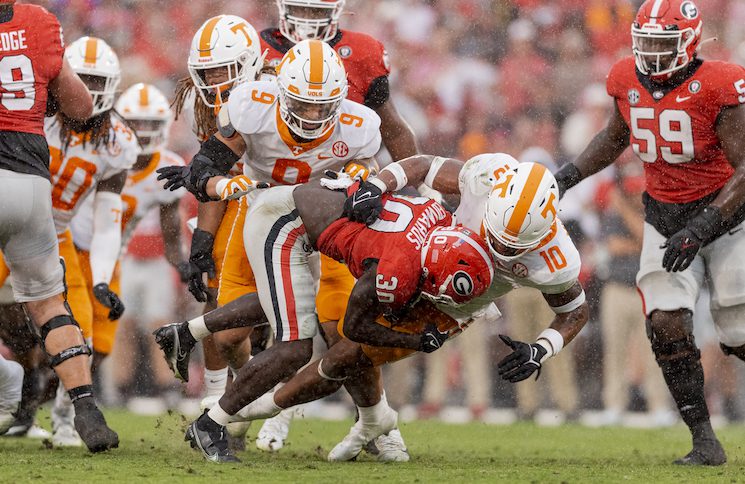 Tennessee football is at home this weekend as Georgia represents the SEC East in Atlanta. That doesn’t mean there’s not plenty of games that will affect Tennessee’s bowl game destination.

For Tennessee’s bowl sake, the Vols want USC or TCU to lose in their conference championship game. However, if both win then Tennessee was unlikely to make the playoff even if they never lost to South Carolina. That’s an understandable position for any fan to take but won’t be included in this rooting guide.

If the season ended today, Tennessee would likely go to the Cotton Bowl with the Big 10 pulling off a power play that sends Penn State to the Rose Bowl and Ohio State to the Orange Bowl.

Let’s look at the scenarios that sends Tennessee to the Orange or Sugar Bowl.

The most simple move for Tennessee to improve its bowl position is for Ohio State to jump into the College Football Playoff. That would send Tennessee to the Orange Bowl to face the winner of the ACC Championship game.

That means Tennessee wants Utah to defeat USC for the second time this season, eliminating the Trojans for the playoff race and opening the door for the Buckeyes.

A bad performance by Caleb Williams could also open the door for Hendon Hooker to have a better Heisman Trophy showing.

For the same reasons Tennessee wants USC to lose, the Vols want Kansas State to hand TCU its first loss of the season. A Horned Frogs loss sends Ohio State to the playoffs and Tennessee to the Orange Bowl.

What happens if both USC and TCU lose?

That’s unclear but it is Tennessee’s one path to the Sugar Bowl. A 12-1 TCU may still get in the playoffs over 10-2 Alabama but that is uncertain. It would be little surprise to Alabama leap frog TCU into the playoffs. Lots of Vol fans would understandably not want that but it would almost certainly send Tennessee to the Sugar Bowl— pending a LSU upset over Georgia.

This is perhaps the most important game for Tennessee’s bowl chances. If LSU upsets Georgia then Tennessee would likely fall all the way out to the Citrus Bowl. That would mean no New Years Six Bowl for Tennessee despite a 10-2 record and top 10 ranking.

The playoff committee could use LSU’s win as cause for Tennessee to jump Alabama in the playoff rankings. In that case, the Vols would go to either the Orange or Cotton Bowl depending on the results of other games.

However, Tennessee jumping Alabama seems unlikely given the committee’s past behavior.

This game has no ramifications on what bowl game Tennessee goes to. Cheer for whoever you’d rather Tennessee play in the Cotton Bowl if that’s where the Vols end up.

This game has no ramifications on what bowl game Tennessee goes to. Cheer for whoever you’d rather Tennessee play in the Orange Bowl if that’s where the Vols end up.

Tennessee playing Clemson would make for an interesting storyline given Dabo Swiney’s “flipping burgers” comments about the Vols earlier this season.

This game has no ramifications on Tennessee whatsoever. Cheer for whoever you’d like to see win with all things equal.