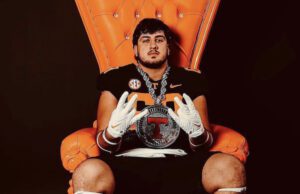 Former University of Texas offensive lineman Andrej Karic has announced that he is transferring to the University of Tennessee with some very specific activity on social media on Monday.

Karic then went on to change both his Twitter and Instagram bios to “OL @Vol_football”. The former Texas lineman has also deleted his entire Instagram post history before making a post on Monday afternoon of himself in Tennessee gear with the caption, “either you did or you didn’t. #GBO”.

While it’s not the big announcement that many are used to in today’s day in the sport, it looks to be a sound commitment nonetheless. The former Texas lineman entered the portal on Dec. 5.

Karic, a native of Southlake, Texas, was a four-star prospect in the class of 2020 according to 247 Sports. While playing for Southlake Carroll High School, Karic became the No. 21 offensive tackle in the country and the No. 36 player from the state of Texas.

The 6-foot-5, 306-pound tackle did redshirt his first season in Austin after only playing in three games against Colorado, UTEP, and in the season-finale against Kansas State. During his redshirt freshman season in 2021, though, Karic saw appearances in 11 of the Longhorns’ games with one start at right tackle against Oklahoma in the Red River Shootout.

According to Texas’ official game notes, Karic played in all 12 games of the Longhorns’ 2022 season with three starts against UTSA, Oklahoma State, and Texas Christian.

Although his activity in the portal has been quiet, multiple reports over the weekend stated that Andrej Karic was in Knoxville for visits on Thursday and Friday.

Karic’s addition to the Tennessee team comes at a very opportunistic time for Glen Elarbee and the Vols’ offensive line.

As announced last week, we know that superstar Tennessee right tackle Darnell Wright will play in the upcoming Orange Bowl but is heading to the NFL Draft right after. Tennessee does have some experienced players for the right tackle position next year, but Karic will likely wind up competing for that spot to be opened.