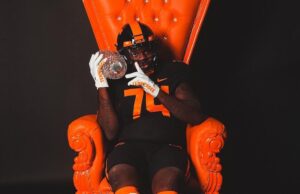 Tennessee has received its third transfer portal commitment of the day with offensive tackle John Campbell.

The former Miami offensive lineman committed to Tennessee through a Twitter post on Monday night. Campbell chose the Vols over Florida and Florida State.

Campbell, a native of Orlando, Florida, will have two years of eligibility remaining at Tennessee.

The 6-foot-5, 320-pound lineman has spent the last five years with the Hurricanes. As a three-star prospect from Dr. Phillips High School (FL) in the class of 2018, Campbell committed to Miami over 40 other programs.

After missing the 2021 season with an injury, Campbell bounced back well in 2022. The fifth-year senior played in and started all 12 games for Miami. The left tackle received a “59.5-grade in 763 snaps from Pro Football Focus this past season” via InsideTheU.

In comparison, here’s how Tennessee’s starting linemen graded out in 2022:

Campbell is a dynamic player with experience after starting 18 of the 34 career games that he has played in. And with Campbell now joining an already experienced starting line for the Vols, Tennessee is looking fairly deep for the 2023 season in the trenches.

While Darnell Wright and Jerome Carvin are heading to the NFL Draft, Tennessee has now brought in three linemen through the portal this offseason: Larry Johnson III from JUCO’s Hutchinson C.C., Andrej Karic from Texas, and now John Campbell from Miami. Tennessee is also bringing in talented linemen from the 2023 recruiting class such as four-star Shamurad Umarov and three-star Vysen Lang.

Campbell is now the seventh transfer portal player that Tennessee has received a commitment from and the third commit from the portal on Monday alone.