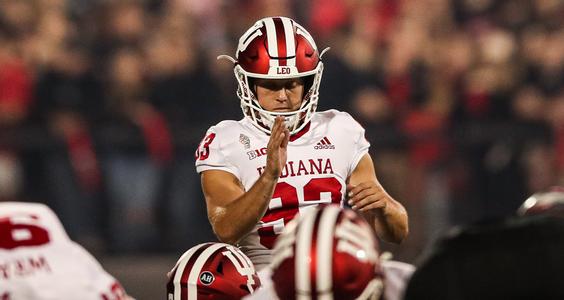 Tennessee has added the commitment from transfer kicker Charles Campbell out of the portal. Campbell shared the news that he was heading to UT via his Twitter page on Wednesday evening.

Campbell transfers to Tennessee with one year of eligibility remaining after five seasons at the University of Indiana.

After redshirting his freshman season and seeing limited opportunities in his second year, Campbell has since served as the Hoosiers’ starting kicker over the past three seasons.

As seen in Campbell’s tweet, the former Hoosier is now returning home, as Campbell is originally from Jackson, Tennessee.

Campbell’s commitment makes it two transfer portal lands for the Vols in one day, as Tennessee picked up the commitment from former UC-Davis tight end McCallan Castles earlier on Wednesday.

Like Castles, Campbell is a transfer portal add in a position of need. With Chase McGrath, Tennessee’s starter in the past two seasons, having no more years of eligibility remaining, an experienced player such as Campbell will give the Vols a solid go-to option. Tennessee is currently Josh Turbyville, J.T. Carver and Toby Wilson, who has one year of eligibility remaining, at the position. Wilson has handled kickoff duties from time to time and has attempted a handful of extra points in his career (5-6), while Carver has attempted and made just one kick during his two years as a Vol.

Campbell finishes his career ranked 8th all-time in career field goals made at Indiana with 39, and he sits 14th in program history in points (179). His five 50+ yard makes put him second all time in school history. Like Chase McGrath did after Tennessee’s win over LSU, Campbell earned conference Special Teams Player of the Week honors in September after making four field goals against Western Kentucky.

Campbell’s experience at a Big 10 program makes him a big land for Mike Ekeler’s squad. If Paxton Brooks comes back for his final year of eligibility, the Vols look poised to have an above average duo in the kicking and punting areas in 2023.