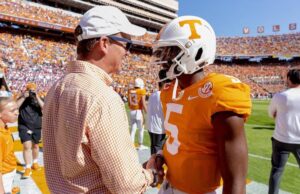 The awards and recognitions for Tennessee quarterback Hendon Hooker continue to roll in after the conclusion of the regular season.

The second-year Tennessee quarterback has already been named a Walter Camp Player of the Year finalist, USA Today Sports’ SEC Player of the Year, and a Maxwell Award finalist. Hooker is now adding one more prestigious recognition to his collection.

On Friday afternoon, Hendon Hooker was named one of the 11 finalists for the Manning Award.

The Manning Award is annually given to the top quarterback in college football. The unfortunate aspect of the award, though, is that the winner will be announced following the conclusion of college football’s postseason games, thus taking a quarterback’s performance in the bowl game into consideration.

Nonetheless, while Hooker won’t be participating in Tennessee’s New Year’s Six game, the Tennessee quarterback has already left his mark on the college football world.

Hooker spent the majority of the season near or at the top of Heisman lists across the country. From a team perspective, Hooker led Tennessee to five ranked wins this season, including two road games and four ranked SEC games. Hooker also led the Volunteers to its first 10-win season since 2006 en route to an NY6 bowl game during the 2022 season.

From an individual perspective, Hooker closes the 2022 season as the SEC’s back-to-back highest-rated quarterback in the conference. Hooker ended his season with the third-most passing yards among SEC quarterbacks and the highest completion percentage as well.

“The guy works endlessly, every single day, at his craft. Almost being like a full-time coach as far as the amount of time he spends in our offices. And at the same time, when he is with his teammates, driving them to be their absolute best and to climb every single day for our program to be its best.”

The 11 Manning Award finalists are as follows: