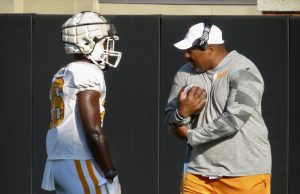 Tennessee running back Justin Williams-Thomas has entered the transfer portal after one season with the team, the freshman announced on Twitter Sunday evening.

“First off, I want to thank God for blessing me with all the opportunities that he has given me and my family,” Williams-Thomas said in his post.

“I would like to thank Coach Heupel, Coach Mack and the entire Tennessee staff for giving me an opportunity to play at the next level! To all my teammates thank you for all the memories and good times we shared together and the opportunity to grow together as brothers. I will definitely miss you all! To Vol Nation, this year was great! I would not trade it for anything. Thank you guys for all the love and support you showed me through our ups and downs this year! You all are truly the best!

“After much prayer, consideration and discussion with my family, I will be entering the transfer portal on December 5th! My recruitment is open. I have 4 years of eligibility left,” Williams-Thomas added to conclude his message.

Williams-Thomas saw limited work in his freshman year, serving as the fourth option in a backfield that was led by Jabari Small, Jaylen Wright and fellow freshman Dylan Sampson.

The Dallas, Georgia, native recorded 11 carries for 37 yards and no touchdowns or catches during his time as a Vol. The only game in which the freshman tallied double digit yards was in Tennessee’s 63-6 blowout victory over Akron in Week 3.

There was a lot of excitement around Williams-Thomas coming to Rocky Top, but fumbling and pass protection issues hindered his ability to make an impact in Josh Heupel’s offense. Williams-Thomas committed to Tennessee as a four-star recruit out of Georgia, choosing the Vols over 25 other Division I offers, 18 of which were from Power 5 programs.

Williams-Thomas has four years of eligibility remaining and has plenty of potential to make an impact elsewhere. The 18-year-old has a great mix of size and speed and has shown ability to catch passes in practice.

With Williams-Thomas and Whitehead having entered the portal, the only remaining running backs on Tennessee’s roster are Jabari Small, Jaylen Wright, Dylan Sampson and Patrick Wilk.