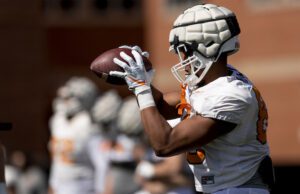 Tennessee tight end Miles Campbell is set to enter the transfer portal, according to a tweet from himself on Thursday afternoon.

Campbell is the third Tennessee player to enter the portal following wide receivers Jimmy Calloway and Jimmy Holiday on Wednesday.

“The past 2 years here have been a great lesson for the man I am becoming to be,” Campbell said in his social media post on Thursday. “I thank Coach Pruitt and his past staff for giving me the opportunity to play here. I also thank Coach Heupel and his staff for holding that opportunity to give me chances to better myself.”

“I’m thankful for the relationships with my teammates that I have built. I also want to thank Jeronimo and his staff for making me better as well. With that being said, I will be putting my name in the transfer portal. Thank you Rocky Top!”

The 6-foot-3, 235-pound redshirt freshman originally committed to Tennessee in May 2020 under former head coach Jeremy Pruitt and his staff. The Douglasville, Georgia native then stayed with Tennessee through the coaching change that would come just a handful of months later by the end of the year.

With two veteran tight ends on the Tennessee roster in the Heupel administration already, it has been a slow process for Campbell to see the field. Jacob Warren was a go-to tight end during the 2021 season and Princeton Fant has emerged as a versatile touchdown machine during the 2022 season.

Miles Campbell did play in four games last season as he was primarily in a special teams role.

Campbell’s only action during the 2022 regular season saw him take 13 offensive snaps against UT Martin during Tennessee’s Homecoming game on October 22nd.

Prior to his Tennessee commitment in early 2020, Campbell was a four-star recruit from 247 Sports and a three-star from the composite rankings. Campbell held more than 30 offers at the time of his commitment including strong programs such as Arkansas, Auburn, Florida, Florida State, Kentucky, Miami, Michigan, Ole Miss, and Pittsburgh.

While he was on their radar, neither Georgia nor Clemson ended up offering Campbell in high school.

The transfer portal will officially open on Monday, Dec. 5.