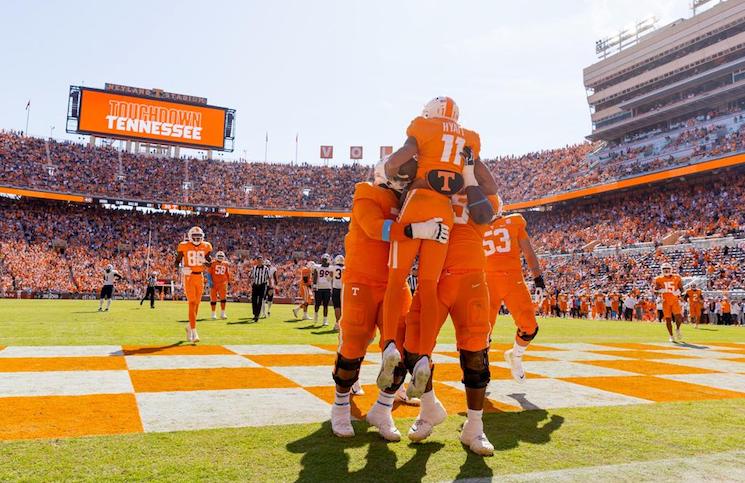 With that, NFL media shifts more of their focus to the upcoming NFL Draft, leading to more mock drafts being released.

In the 2022 NFL Draft, five Vols were selected after one season with head coach Josh Heupel, a mark that was the highest for Tennessee since 2017.

This year, Tennessee figures to have at least five to six players selected in the seven-round NFL Draft with the potential to have the most selections since the 2003 NFL Draft (8).

Several Vols will be selected, but there are no slam dunk first-round selections. However, former Tennessee wide receiver and 2022 Biletnikoff Award winner Jalin Hyatt has been projected to go off the board in the first round by a handful of mocks.

On Monday, CBS Sports draft expert Ryan Wilson released a mock draft that had Jalin Hyatt go in the first round to the Dallas Cowboys at No. 26 overall.

If Wilson’s projection holds true, Hyatt would join an exciting offense in the Cowboys that features rising running back Tony Pollard, young star wide receiver CeeDee Lamb and veteran quarterback Dak Prescott. In addition, Hyatt would join a team that has made the playoffs each of the past two seasons and has a Super Bowl-winning head coach in Mike McCarthy.

If Hyatt is selected in the first round, he would become the first Volunteer to go off the board on the first night since Derek Barnett in the 2017 NFL Draft (14th overall–Eagles).

Hyatt’s 2022 campaign was highlighted, by his five-touchdown effort in Tennessee’s 52-49 win over Alabama in October, 11-catch performance in the Vols’ 40-13 win over LSU and his 138-yard, two touchdown night in UT’s 44-6 win over rival Kentucky. Hyatt ultimately set the program single-season receiving touchdowns record with 15 and had the second-most single-season receiving yards in program history with 1,267.

While not all mock drafts have Hyatt going off the board in the first 32 picks, the VFL will undoubtedly be a Day 2 pick if he falls that far. In Yahoo’s latest two-round mock by draft expert Charles McDonald, Hyatt came off the board at 43rd overall to the Cleveland Browns.

In other mocks around the industry, WalterFootball.com released a mock Wednesday that had Hyatt going to the Kansas City Chiefs at No. 30 overall, a pick that would re-unite Hyatt with former teammate and current Chiefs starting right guard Trey Smith.