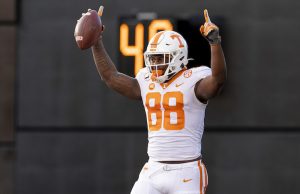 Three former Tennessee Volunteers are set for action at the end of January with the NFLPA Collegiate Bowl.

The NFLPA Collegiate Bowl will take place on Saturday, Jan. 28, from sunny California in the Rose Bowl Stadium. The game will be at 6:00 p.m. ET and will be broadcasted on the NFL Network.

“The NFLPA Collegiate Bowl is the premier postseason all-star game for any draft-eligible college football players,” the website states. “More than just a game, this week-long experience provides players with the opportunity to showcase their game to NFL scouts and coaches, while learning from the best in the business. The NFLPA Collegiate Bowl not only prepares players for the speed and intensity of professional football, but also for the business and lifestyle changes that come with it.”

Bumphus, Fant, and Flowers won’t be the only ones with some Volunteer State ties, though. After teaming up for eight seasons in Nashville, former Titans head coach Jeff Fisher and running back Eddie George will serve as the two head coaches on opposing sides

LaTrell Bumphus ended his six-year career at Tennessee with his most active season yet in 2022. Bumphus played in all 13 games and ended the year with 11 solo tackles, 10 assisted tackles, and 21 total tackles. The Savannah, Tennessee native also added in 3.5 sacks for 11 yards.

After spending the last five years in Knoxville, safety Trevon Flowers is officially preparing for the NFL Draft. Flowers found two interceptions during the 2022 season including an impressive play in the endzone against LSU in Baton Rouge. Flowers also added in 34 solo tackles and 23 assisted tackles for a total of 57. The Atlanta, Georgia native forced two fumbles, deflected three passes, and was credited with 1.5 sacks for 12 yards on the season.

Princeton Fant has played in every single game in the Josh Heupel era over the last two seasons. The five-year Tennessee player certainly saw his most productive season in 2022, especially from a scoring standpoint. Prior to this season, Fant only had two touchdowns. The Nashville native had eight touchdowns this past season with five on the ground and three through the air. Fant also threw a touchdown.

Fant ended the season with 241 yards and three receiving touchdowns on 22 receptions. The fifth-year senior also added in 17 yards and five touchdowns on six rushing attempts this year and completed his one pass attempt for 66 yards and a touchdown score on a trick play.