Tennessee coach Rick Barnes has talked multiple times about how freshman Julian Phillips needs to drive to score the basketball instead of looking for a foul.

Against Alcorn State, Phillips did that frequently scoring at the basket with a consistency he hasn’t all season. The 6-foot-8 wing scored in the half court and in transition including a pair of extremely impressive finishes.

While driving to score, Phillips got to the foul line too.  The freshman made all seven of his free throw attempts in the win. Phillips entered the matchup having made just two three-pointer on the season and added his third against the braves.

Phillips ended the game with 18 points (five-of-10 shooting) four rebounds and three assists in the lopsided win. The freshman was two points shy of being the game’s leading scorer

Tennessee entered Sunday night’s matchup against Alcorn State 7-1 but struggling to shoot from the perimeter.  This is a team Barnes expects to shoot well and one that shot well with the same core of players last season.

But entering the Alcorn State game, Tennessee was just shooting 33% from three-point range and 40% from the field as a team.

Tennessee blew both of those numbers out of the water, passing its previous scoring high with 7:57 to go in the game.

The Vols 94 points were 13 more than their previous high 81 and did it shooting 52% from the field and 33% from three-point range. While the 33% shooting matches its season average, the Vols missed their final four three-point attempts of the game with bench players and walk ons in.

The result was Tennessee’s offense looking better than it has all season. The opponent deserves a large deal of credit for that but the Vols have beat lesser teams easily this season without their offense looking great.

Par For The Course Defense

Impressive numbers for most defenses, it was just another day at the office for Tennessee’s stellar defense.

While many of Alcorn State’s turnovers were self inflicted, more were caused by the Vols’ defense. Tennessee tallied 13 steals with Zakai Zeigler tallying five steals and Jahmai Mashack tallying four.

When it avoided turnovers, Alcorn State did not shoot well. The Braves made just 27% of their shots from the field and 6% from three-point range. 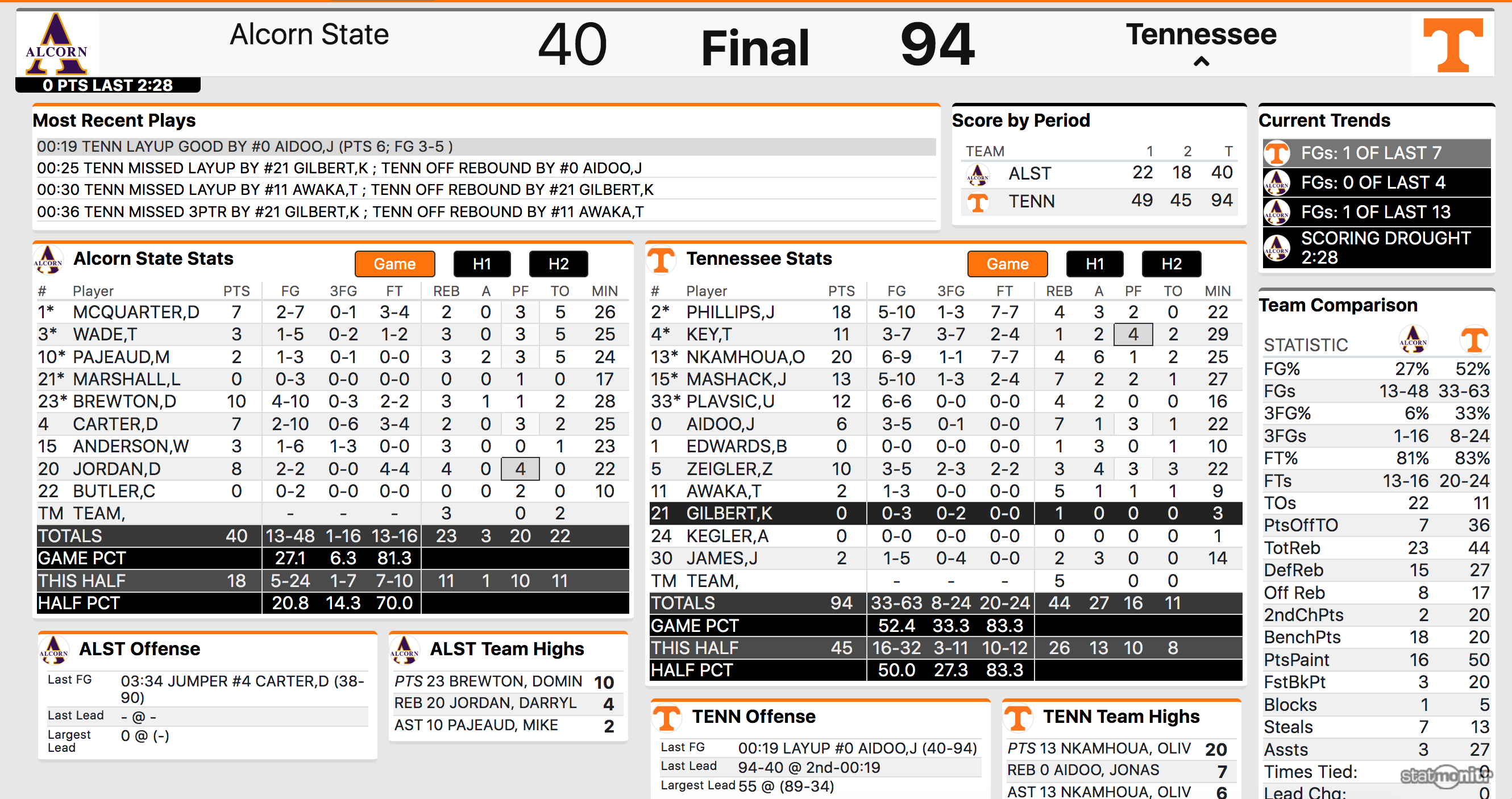 Tennessee returns to the court Wednesday night against Eastern Kentucky. Tip-off between the Vols and Colonels is at 7 p.m. ET on the SEC Network.