Tennessee improved to 8-1 Wednesday night gritting past Eastern Kentucky with ease in a, 84-49, victory.

The Vols’ defense was elite like it usually is and after a slow offensive start, Tyreke Key sparked the Vols to a strong second half.

Sluggish First Half On Both Sides

Zakai Zeigler particularly struggled against the extended defense, thrice turning it over with only one first half assist.

The Colonels’ trapping zone defense did allow Tennessee to get open shots and plenty of them from the perimeter. However, the Vols couldn’t get perimeter shots to go, making just two-of-15 three-point attempts in the first half. While the perimeter shooting numbers were most glaring, the Vols missed plenty of bunnies at the rim and made less then half of their shots at the rim in the opening half.

Tennessee’s offensive saving grace was its rebounding (more on that in a minute) and its ability to get to the free throw line. The Vols took 17 first half free throws on their way to 41 for the game.

Getting to the charity stripe is turning into a strength for this Tennessee team. Freshman Julian Phillips seems to find his way there more than anyone else and it continued against the Colonels where Phillips made seven-of-10 attempts at the free throw line.

And exploit it they would.

Tennessee’s offensive rebounding was its saving grace in the first half. The Vols totaled 11 first half boards and turned them into 14 of their 32 first half points.

Rick Barnes’ team didn’t duplicate the same success in the second half but still had plenty of success on the offensive glass, ending the game with 20 offensive rebounds and 25 second chance points.

Plenty of Vols had success rebounding including Uros Plavsic and Josiah-Jordan James but no one had more success on the boards than Julian Phillips.

The freshman is improving rapidly early in the season and that’s been apparent on the glass as much as anywhere else. Phillips totaled eight first half rebounds on his way to totaling 10 including five on the offensive end.

Tennessee had a comfortable lead at halftime but had failed to truly break open the game due to a poor offensive half. Tyreke Key didn’t wait long to push Tennessee’s lead to 20-plus points in the second half.

Key had an up-and-under three-point play on Tennessee’s opening possession of the second half and that was just the start of a dominant stretch for the super senior. Key scored eight of the second half’s first 10 points as the Vols opened the frame up with a 10-0 run that they’d never look back from.

The Indiana State transfer went on to score 12 second half points to finish with a game-high 17 points. The offensive aggressiveness Key showed is exactly what Tennessee’s coaches have been looking for out of him.

However, Key’s second half show was cut short. Key exited the game with six-plus minutes remaining holding his right knee. Key did not return to the game and did not remain on Tennessee’s bench once he exited the game.

While Tennessee’s offense still wasn’t perfect in the second half, it was much better than it was in the first. The Vols scored 52 second half points in the win. 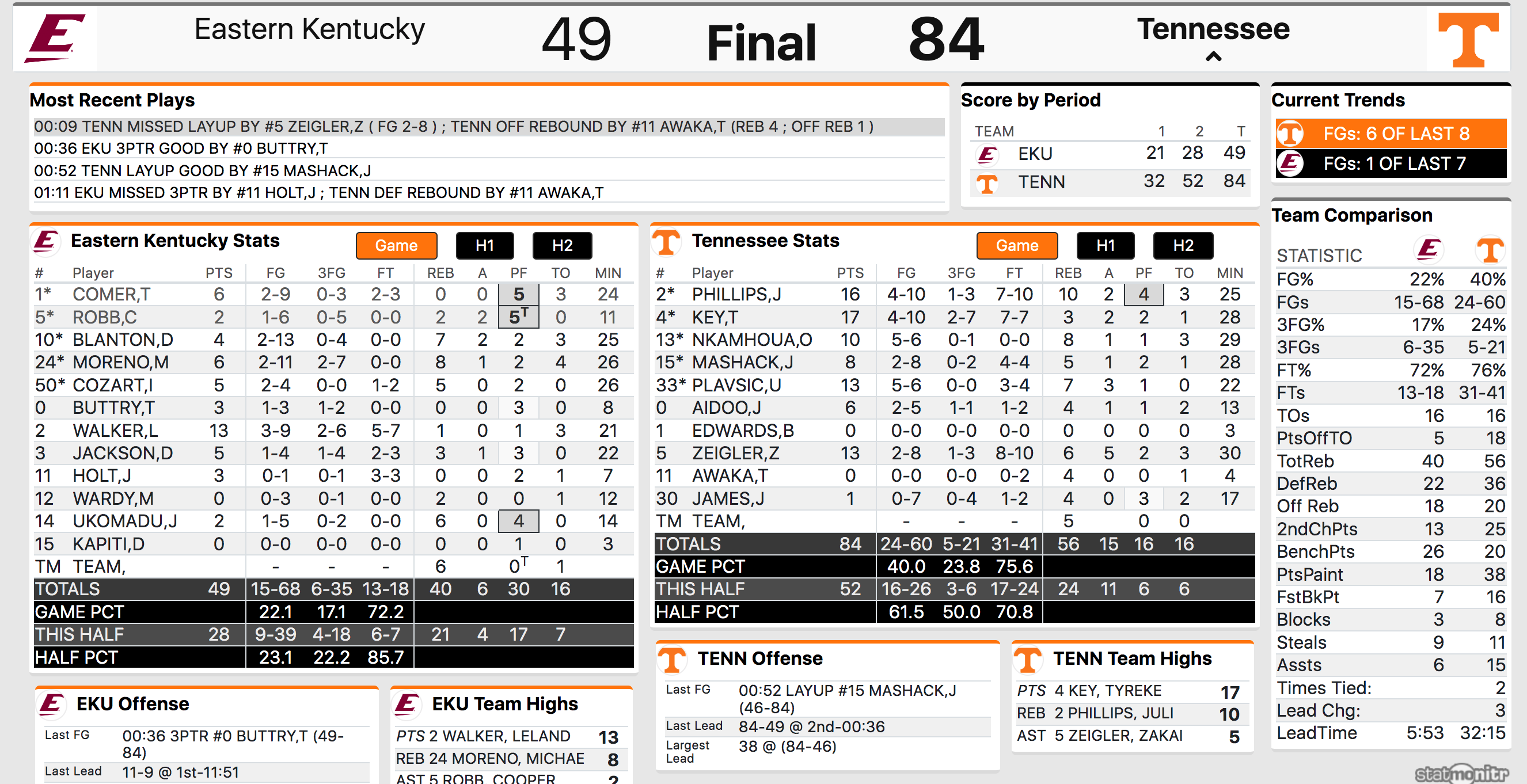 Tennessee travels to Brooklyn where it’ll face No. 13 Maryland in the Hall of Fame Invitation. Tip-off between the Vols and Terrapins is at 4:30 p.m. ET Sunday. FOX Sports 1 is broadcasting the game.