Julian Phillips’ pump faked before pulling the trigger on a three-pointer that bounced off nearly every inch of the rim before falling through the net. It was that type of night for Tennessee basketball.

Tennessee’s Start Sets The Tone For The Night

In shades of last season’s win over Arizona, Tennessee was dominant out the gates. The Vols scored the game’s first 16 points, taking the 16-0 advantage into the first media timeout.

Santiago Vescovi — who’s broken out of a rare shooting slump in the last three games — was fantastic out the gate, making three triples in the game’s opening moments. He wasn’t the only Vol firing triples to open the game.

Tyreke Key took two in the opening three minutes and made one— something Vols’ coach Rick Barnes has been imploring him to do in recent weeks.

The Vols turned defense into offense to open the game. Tennessee’s elite defense hounded an inside-out Mississippi State scoring offense and capitalized on four Bulldogs turnovers in the game’s first five minutes by getting open looks before Mississippi State could set its stout half court defense.

Opening up a massive lead was particularly beneficial due to the Bulldogs’ defensive mindset and struggles to score consistently. Because of that, Mississippi State had no run like Arizona had a season ago and Thompson-Boling Arena. The game’s first five minutes set the tone for the rest of the night.

More From RTI: Josiah-Jordan James Returns To The Lineup Against Mississippi State

Good Luck Beating Tennessee When They Shoot Like That

Rick Barnes likes to remind the media that every basketball team in America looks good when shots are falling. And 12 games into Tennessee’s season shots haven’t often been falling.

Tennessee shot 64% from three in the first half and even after cooling off to a sustainable shooting percentage in the second half, the Vols made 12-of-21 (57%) three-point attempts in the win.

As usual, Santiago Vescovi led the way for the three-point shooting barrage, making four-of-eight attempts from deep on his way to scoring a team-high 14 points.

However, Vescovi was just one of five Tennessee players to make triples and the other four all shot at a 40% clip or better. Zeigler was most effective from deep, making three-of-five attempts.

Barnes is right. Offense looks really easy when three-pointers are falling. With the defense that Tennessee plays, good luck facing them on a night shots do fall.

It had been a quiet few weeks for Julian Phillips. After reaching double digits scoring in seven of his first 10 collegiate games hadn’t in his previous four games.

The five-star freshman tallied his eighth double-digit scoring performance against Mississippi State, totaling 11 points on an efficient five-of-six shooting from the field.

Phillips scored off of offensive rebounds, dunked on nice cuts and even got just his fifth three of the season to fall— the jumper mentioned in the lede.

It was a strong offensive night from nearly every Vol but Phillips efficiency particularly stood. The Phillips Tennessee got against Mississippi State wasn’t a superstar but he was a player that can provide an offensive boost. For a team that’s inconsistent offensively, that’s perhaps the most important thing they need from the freshman.

Granted, Phillips’ offense was far from his only contribution on the night. The 6-foot-8 wing tallied a team-high seven rebounds in the win. 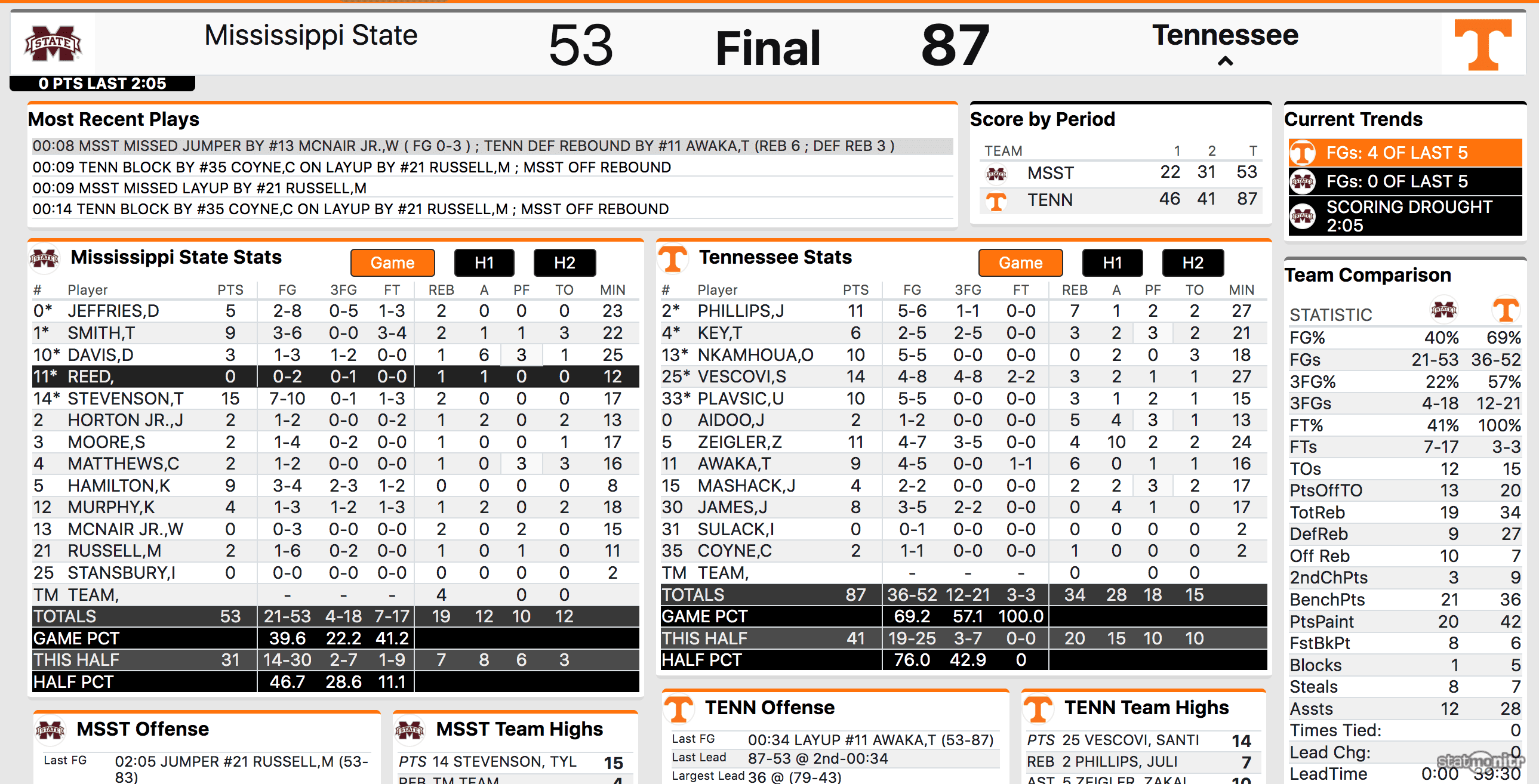 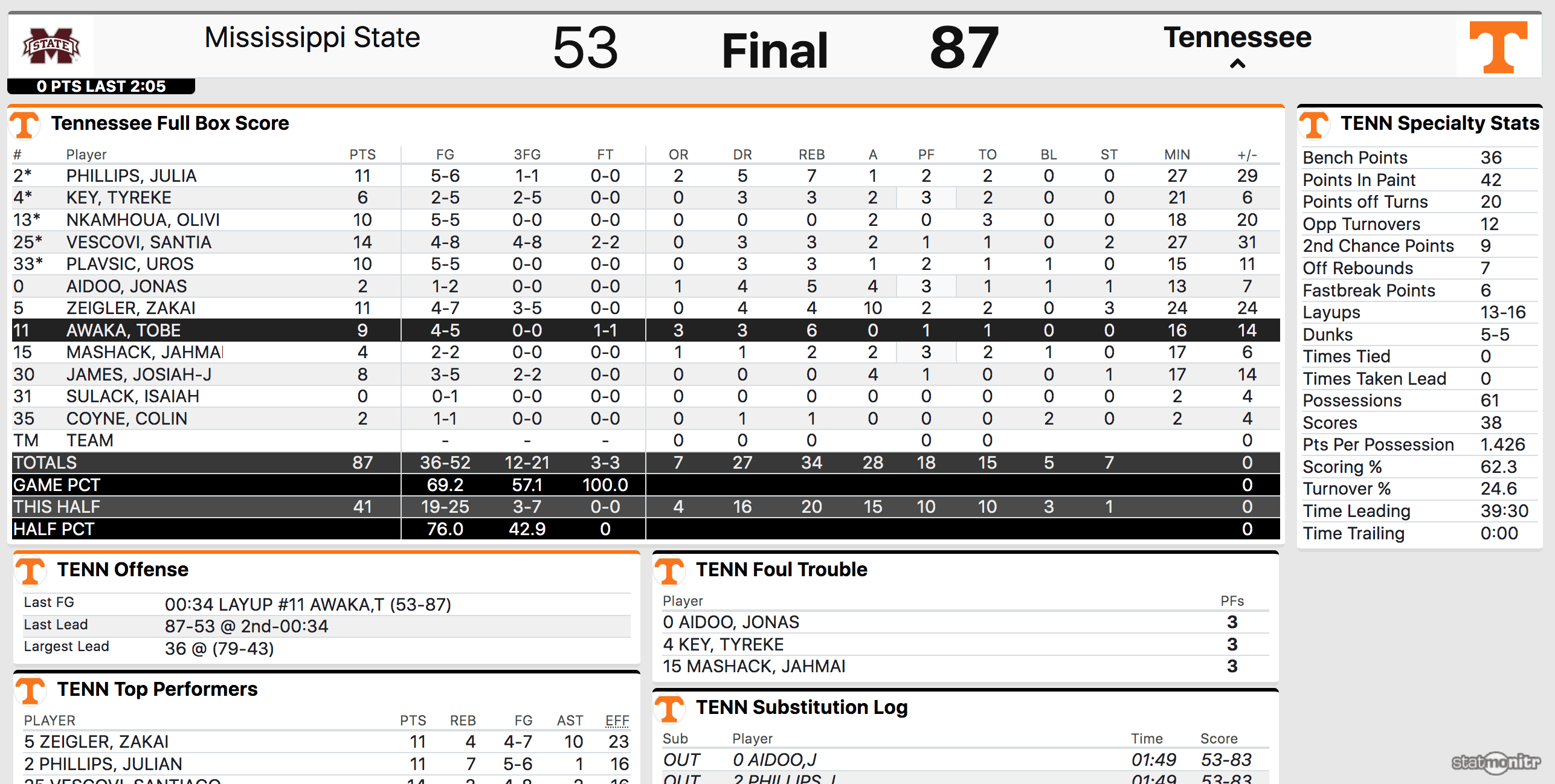 Tennessee heads on the road Saturday to face South Carolina in Columbia. Tip-off from Colonial Life Arena is at 3:30 p.m. ET. The SEC Network is broadcasting the game.