Tennessee made quick and easy work of Austin Peay, jumping out to a massive lead in the game’s opening minuted before cruising to a, 86-44, victory.

The Vols bounced back from Saturday’s loss at then-No. 9 Arizona and came ready to play avoiding any possibility of an upset.

Tennessee Puts The Game Away Quickly

Coaches often say the final game before the Christmas break is a prime spot for upsets as SEC teams often face lesser competition and players are ready for the holiday break.

Tennessee avoided that trap and left no doubt about it. Coming off of its second loss of the season, Tennessee was ready to play.

The Vols and Governors were tied, 2-2, in the game’s opening minutes. Tennessee proceeded to score the game’s next 18 points, going on a massive run to take a nearly insurmountable, 20-2, lead.

“This time of year is a tough time to play knowing guys will be leaving here and it’ll be a quick turnaround for everybody trying to get home and get back,” Tennessee head coach Rick Barnes said. “Some guys won’t go, but just really proud of the concentration and the fact that they gave Austin Peay the utmost respect by the way they prepared for this game.”

Tennessee used strong interior scoring — more on that in a moment — and dominant defense to jump out to the massive lead. The Governors didn’t make their first field goal until the 11:02 mark in the first half and finished the first half with 10 turnovers while shooting 32% from the field.

In a game Tennessee easily could have looked past, the Vols came out ready and motivated.

More From RTI: Josiah-Jordan James Out Against Austin Peay

Finding consistent front court scoring has been a struggled for Tennessee for most of the last two seasons and has been a pitfall of this team early in the season.

After a strong, but not dominant, performance against Arizona and its highly touted front court, the Vols front line showed out against Austin Peay. The four Tennessee big men combined for 42 points on 20-of-28 shooting from the field.

Olivier Nkamhoua is the most talented scorer in the bunch and after the best performance of his career against Arizona, the Finland native delivered again. Nkamhoua scored six of Tennessee’s first eight points on the way to a team-high 20 point night.

Speaking of grabbing rebounds, Tennessee freshman Tobe Awaka did that in 16 minutes against the Govs. Awaka’s strength is his ability to attack the glass and he showed it grabbing 11 boards to go along with his six points.

“I think it’s probably 80-20, to be honest,” Awaka said of what makes a great rebounder. “I think 80 percent of it is just the will to get it. Then obviously when it comes to defensive rebounding, you learn to box out and gain position on you opponent. But yeah, it’s really just a want to go get the ball.”

After a quiet stretch — in part due to sickness that sidelined him against Maryland — Jonas Aidoo turned in one of his better performances of the season in Tennessee’s final pre conference tune up. The sophomore tallied 10 points on five-of-seven shooting while adding nine rebounds.

“I want to say so, but again, I still think that’s a question mark if we can still be consistent,” Barnes said on whether or not the front court is turning a corner. “Can we get consistent to where they can? They’re working at it. They really are. They’re working hard at it, but I guess I’d like to say I hope so, but I guess it remains to be seen.”

Tennessee shooting guard Santiago Vescovi is one of the best shooters in the SEC. It’s a large reason why the Montevideo, Uruguay native was a First Team All-SEC selection a season ago and entered the season as one of the conference’s best players.

However, Vescovi hasn’t shot like the 2021-22 version of himself early in the 2022-23 season. The left-handed sharp shooter entered the Austin Peay game having made only 28% of his three-pointers on the season.

Some of Vescovi’s shooting struggles could be accounted to his larger role in the offense and having to take harder shots with point guard Kennedy Chandler off to the NBA but the senior is far too good a shooter to shoot as poorly as he has from the perimeter the entire season.

Vescovi snapped out of his slump against Austin Peay, making all four of his first half three-point attempts on his way to a 18-point, five-of-five three-point shooting performance.

“If you’re a shooter, confidence is one of the things you can’t lose,” Vescovi said. “That’s one of the most important things. I think confidence wise I’ve been good. Like, I’ve never lost confidence shooting wise. I’ve just gotten into a slump, personally. … Being able to see the shots go in has been kind of refreshing.”

The senior stroked the ball well from deep but was fantastic beyond that, scoring at the basket while dishing out five assists to just one turnover.

With SEC battles beginning next week, Tennessee sure hopes Vescovi’s shooting fortunes flip. The final tune up of pre conference play indicates that it will.

“But the one thing we did say to the team is that we weren’t concerned about Santi (Vescovi) shooting it,” Barnes said. “Wouldn’t take but for a game for him to get back with it. 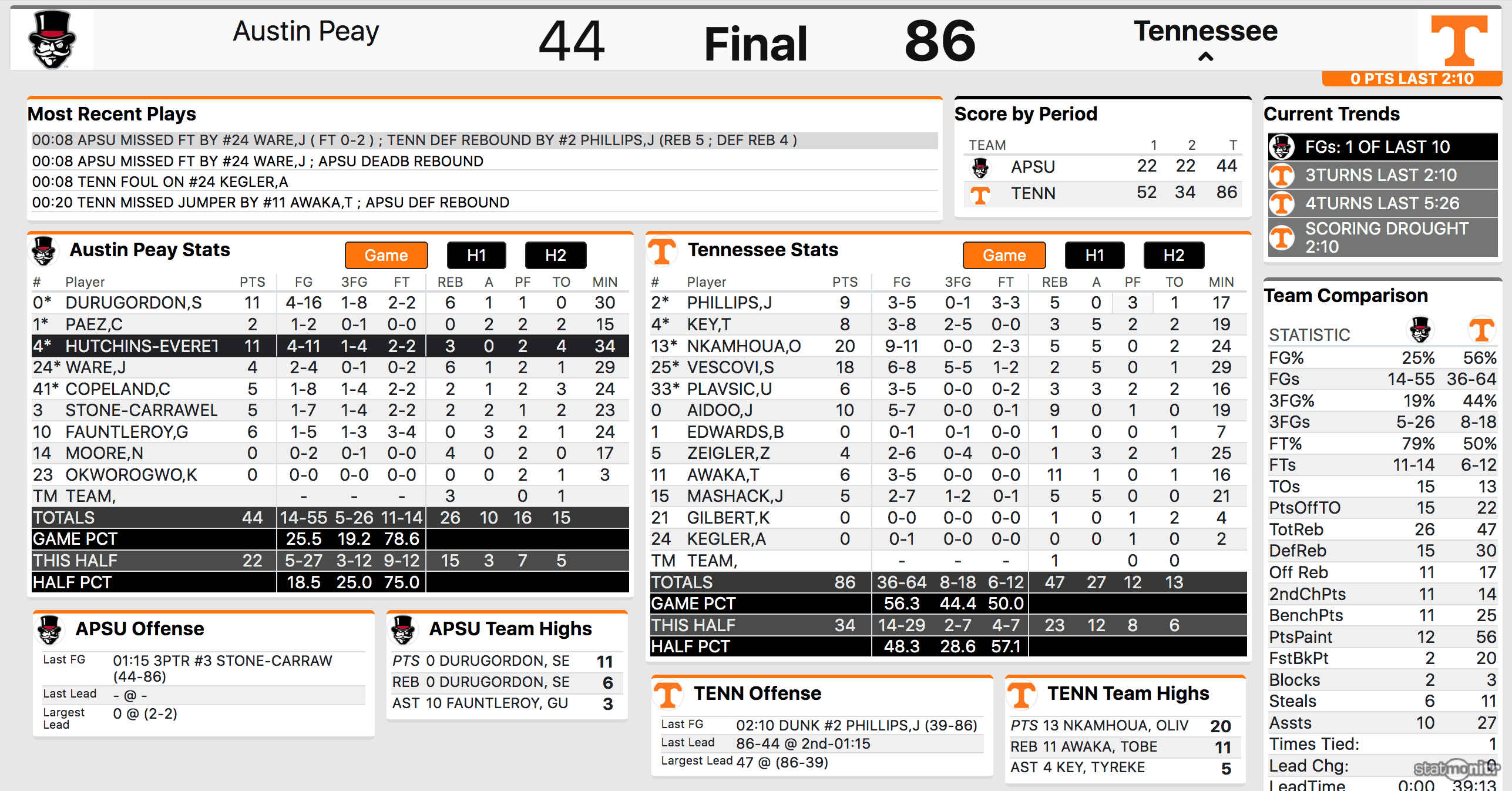 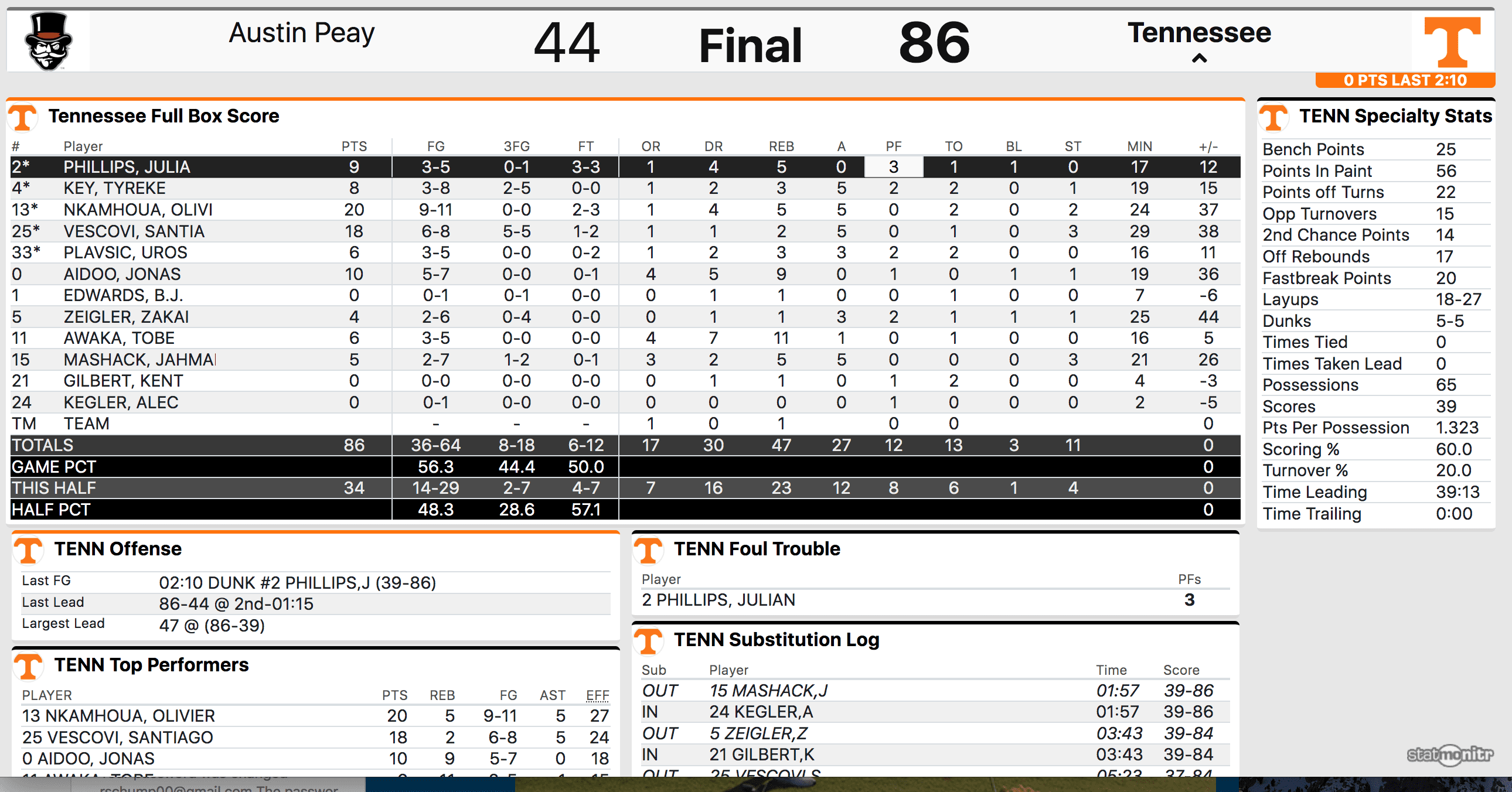 Tennessee has a week off before opening SEC play at Ole miss on Dec. 28. Tip-off from Oxford is at 5 p.m. ET on the SEC Network.