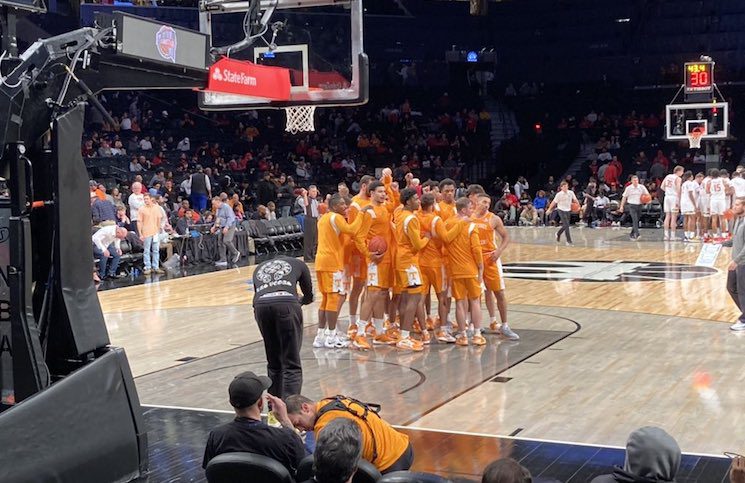 The Vols built a 21-point first half led and a 17-point halftime lead and managed to hang on for dear life as Maryland ended the game on an extended 24-11 run.

Tennessee’s defense entered the top 15 matchup with Maryland as the No. 1 team in KenPom adjusted defensive efficiency. However, the Vols were without two of their top defenders: Josiah-Jordan James and Jonas Aidoo.

It was no problem for Tennessee’s defense. Even undermanned, the Vols lived up to their extremely high defensive standards.

It started in the first half when Tennessee absolutely shoot down the Terrapins. Maryland made just three first half field goals and shot 13% from the field with 10 turnovers on its way to tallying just 17 points in the first 20 minutes.

The first half defensive dominance allowed Tennessee to open up a convincing first half lead. Without Aidoo, both Olivier Nkamhoua and freshman Tobe Awaka turned in strong defensive performances against a talented Maryland front court.

Maryland totaled 36 second half points, shooting 50% from the field— a complete 180 from the first half that paved the way for the Terps comeback.

The rebounding success was clear from the jump when the Vols dominated the glass in the game’s opening minutes on their way to 13 first half offensive rebounds. Tennessee ended the game with 21 offensive rebounds in large part due to the effort of Tobe Awaka.

The freshman forward saw an increase in minutes due to sophomore Jonas Aidoo’s absence with flu-like symptoms and made the most of his opportunities. If the New York native can do anything on the basketball court it’s rebound the basketball. That much was apparent against Maryland where Awaka totaled eight rebounds (five offensive) to go along with seven points.

Olivier Nkamhoua was impressive on the glass as well, tallying nine rebounds including five on the offensive end.

The Vols weren’t as good rebounding on the defensive end but had success there too, out rebounding Maryland, 48-40.

Tennessee once led by 21 points in the first half before taking a 17 point lead into the locker room. Maryland slowly chipped away at the Vols’ lead through the first 10 minutes of the second half but Tennessee found answers and still led by 16 with 11-plus minutes to play.

That’s when the game flipped on its head. Tennessee went on one of its patented scoring droughts while Maryland found its offensive rhythm. It led to a 12-0 and 17-3 extended Maryland run as the Terps pulled within five with just under six minutes to play.

Maryland never took the lead but the game was highly contested with the feel that it could go either way in the game’s last five minutes.

Tennessee’s offense struggled throughout the entire final 10 minutes but they found a way to get enough shots to go— particularly from the perimeter. Tyreke Key, Jahmai Mashack and Zakai Zeigler all hit huge triples down the stretch while the Vols got enough stops.

Tennessee didn’t make it easy on itself at all, missing the front end of a one-and-one and going one-of-two at the line in the game’s final minute.

However, Tennessee did enough to clang on and earn a top 15 victory.

Tennessee has five days off before facing No. 10 Arizona in Tucson Saturday.