Tennessee was down two starters and played as poorly as possible for the first 14 minutes before finding its offensive stride and pushing past Mississippi State, 70-59, in Starkville Tuesday night.

Zakai Zeigler and Julian Phillips were fantastic in the second half as the Vols flipped an offensive script and bounced back from its first SEC loss of the season.

Tennessee was fighting an uphill battle offensively, going on the road against a stout defense without not only its starting backcourt but two of the Vols’ three true ball handlers.

Santiago Vescovi and Tyreke Key’s absence was felt early as Tennessee struggled to get its offense going and point guard Zakai Zeigler pressed and played poorly for much of the first half.

Zeigler was bearing a great offensive burden but did not handle it well for most of the first half as turnovers added up and the Vols’ offense struggled to create offensive looks.

Turnovers were Tennessee’s biggest issue to open up the game as the Vols totaled 10 of them in the first 12 minutes of the game. In perhaps its worst offensive stretch of the season, Tennessee turned it over on four consecutive possessions.

The Vols turnovers outpaced its made shots for most of the first half. Tennessee’s offense was pitiful for nearly the first 15 minutes of the game, scoring just 10 points in the first 14:57 of game time.

That’s when Zeigler started to settle down, getting Tennessee’s offense into form and the Vols climbed back in the game with a 13-4 run that tied the game at halftime.

Tennessee was terrible offensively for the majority of the first half but found away to be tied at halftime.

More From RTI: Vescovi Out Against Mississippi State With Shoulder Injury

A Down Than Up Game For Zakai Zeigler

Zakai Zeigler could not have been much worse in the first 14 minutes of Tennessee’s road matchup at Mississippi State.

Zeigler turned it over five times and missed six triples in the stretch as Tennessee’s offense looked woeful and the Bulldogs jumped out to an early lead. The sophomore point guard was trying to do too much to make up for Key and Vescovi’s absence and looked poised for a miserable night.

The suddenly, the never shaken Zeigler flipped his night.

Zeigler scored six points and assisted on a Uros Plavsic bucket in the final minutes of the first half as the Vols made the previously mentioned strong run to tie the game at halftime.

The sophomore point guard’s end to the first half was just the start as Zeigler strong play continued in the second half.

Zeigler stopped coughing the ball up, put his teammates in position to half success and even started making shots. That included back-to-back possessions early in the second half as Tennessee extended opened up a 41-35 lead.

After the disastrous first 14 minutes, Zeigler scored 22 points, dished out three assists and turned it over just once in the final 34 minutes. Playing all 40 minutes, Zeigler overcame a bad start and gave the Vols a chance/helped will the Vols to a road victory.

Tennessee’s offense was phenomenal in the second half, looking like a completely different group than the one that struggled so badly the first 15 minutes.

The biggest reason for the offensive outburst was its red-hot three-point shooting (nine-of-10) but don’t discount what freshman Julian Phillips did.

After getting off to a hot start in the first half, its offense started to settle down in the middle of the second half. That’s where Phillips stepped up and played some of the best basketball of his young career.

From the 13:55 to 6:46 mark in the second half, Julian Phillips scored eight of Tennessee’s nine points and kept the Vols in the game as the Vols’ offense struggled to get stops.

Mississippi State turned a six-point deficit into a two-point lead in the first half of that stretch before Phillips got going offensively. After the stretch ended, Tennessee still led by four thanks to the freshman’s output.

Phillips totaled 13 points on four-of-eight shooting in the second half on his way to a 18 point, 11 rebound performance on the road. The five-star freshman turned in one of the best performances of his career on a night the Vols surely needed it. 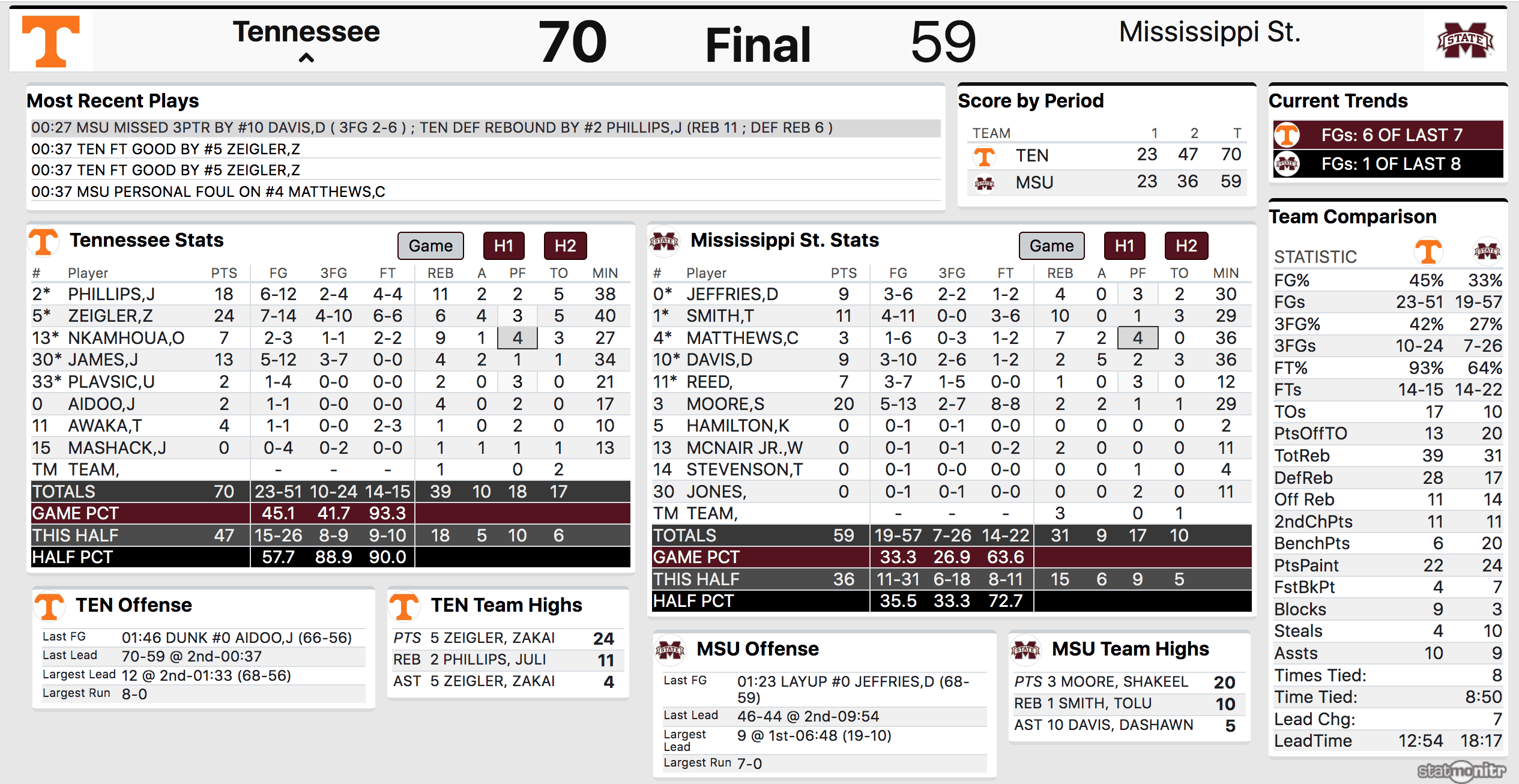 Tennessee stays on the road and heads further south as they face LSU Saturday. Tip-off from the Pete Maravich Center is at 4 p.m. ET. ESPN is broadcasting the game.