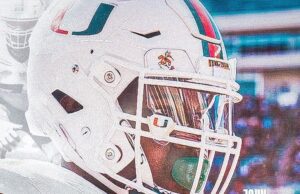 The quick 20-second video shows Campbell in a few different poses inside the Tennessee facility.

“This is orange, don’t say tangerine cause I will get offended,” Campbell wrote in an Instagram post on Friday.

Campbell is a 6-foot-5, 320-pound transfer player from Miami. The Orlando native spent the last five years with the Hurricanes but is now looking for a new destination.

According to 247Sports, Campbell was a three-star prospect out of Dr. Phillips High School (FL) in the class of 2018.

On Friday afternoon, Campbell posted a picture to his Instagram showing that he was in Gainesville for a visit with the Gators. 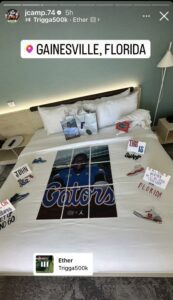 According to 247Sports, Campbell took a visit to Florida State on Dec. 17, just two days after entering the transfer portal.

After missing the 2021 season with an injury, Campbell bounced back well in 2022. The fifth-year senior played in and started all 12 games for Miami. The left tackle received a “59.5-grade in 763 snaps from Pro Football Focus this past season” via InsideTheU.

In comparison, here’s how Tennessee’s starting linemen graded out in 2022:

While making his transfer portal announcement last month, Campbell said that he has two years of eligibility remaining and will be able to play immediately at his next location.

“I am more than grateful for the times at Miami, and the relationships I built over the years,” Campbell wrote on Dec. 14. “They will be unforgettable. I want to thank everyone in the Miami program for everything they’ve done up to this point for helping me. From the coaching staff, strength staff, all the way down to the athletic trainers… With that being said, I would like to officially announce that I have officially entered the NCAA transfer portal with 2 years left of eligibility.”

Over the course of his career, John Campbell started 18 of his 34 games played for Miami.

Tennessee has already hauled in four players from the transfer portal since the end of the regular season in December. The Vols have brought in tight end McCallan Castles, offensive tackle Andrej Karic, linebacker Keenan Pili, and kicker Charles Campbell. All four of those players will be immediately eligible for Tennessee this season.