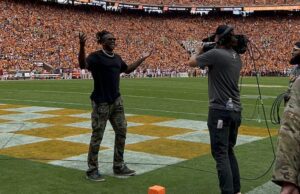 VFL Cordarrelle Patterson at the Tennessee-Alabama game in Knoxville. Photo via @CeeFlashPee84 on Twitter.

Atlanta Falcons running back Cordarrelle Patterson has been selected as the kick returner. Additionally, Tennessee Titans long snapper Morgan Cox has also been selected to the Players’ All-Pro team.

Twenty-nine players were selected to the team in total.

Here is the inaugural Players’ All-Pro Team, via the NFL Players Association: pic.twitter.com/KyeqjecgEG

Just a few days before Christman on Dec. 21, VFL Morgan Cox was selected to the Pro Bowl as the only player representing the University of Tennessee. This will be Cox’s fifth Pro Bowl appearance as one of the top long snappers in the entire league.

On Nov. 20, during a game against the Chicago Bears, Patterson ran back a 103-yard kick return for a touchdown for the ninth kick return score of his career. That touchdown officially gave Patterson the record for the most kick return touchdowns in NFL history. Patterson had five with Minnesota, two with Chicago, and one for Atlanta and New England respectively.

On the year, as a running back, Patterson found 695 yards and eight touchdowns on 144 rushing attempts this season. The former Tennessee standout also added in 122 receiving yards on 21 receptions this year for the Falcons.

Patterson, in particular, has been a gigantic supporter of the Tennessee Volunteers this season. The VFL was at the Tennessee-Alabama game in mid-October while supporting the Vols.

Patterson has also had plenty of fun making bets with his Atlanta teammates – especially regarding a certain pair of checkerboard overalls.

Cordarrelle Patterson posted a picture of Falcons tight end and former Florida Gators player Kyle Pitts wearing the aforementioned overalls after the Vols’ win over the Gators in September.

I heard you guys been looking for @kylepitts__ @Vol_Football @GatorsFB #ROCKYTOP #VOLS pic.twitter.com/5Ll3Iuv978

It wasn’t just Evans, though… Patterson let the whole team know about that game-winning field goal victory over the Crimson Tide.

[email protected] is all about his @Vol_Football and will make sure everyone knows it ? pic.twitter.com/bYNWsNlIuW

Patterson then closed out the season by having Falcons punter and former Clemson specialist Bradley Pinion wear the bright orange-and-white after the Vols’ Orange Bowl victory in December.