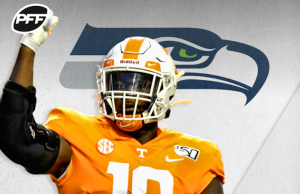 Darrell Taylor is a ball player that just wants to play ball, man.

(If there was ever a time to professionally add the laughing emoji into a sports article, this may be a perfect time.)

During the Seattle Seahawks’ home contest against Las Vegas on Sunday afternoon, the former Volunteer had one of the funniest plays in the entire NFL this season.

No more than TEN seconds into the game on Sunday, yes, 10 seconds into the first quarter, Taylor was on the sideline for the Seahawks’ defensive play. Vegas quarterback Derek Carr overthrew Devante Adams, sailing the ball into the waiting hands of a Seattle defensive back.

As the defensive back was running down the field with the intercepted ball, Taylor, who was clearly on the sidelines, ran out to celebrate… but once he realized the play was still going on, Taylor figured that he might as well throw a couple of blocks for his guy.

We know that Seattle boasts “The 12th Man”, but boy, Taylor really took that to the next level on Sunday. (Insert another laughing emoji here.)

Check it out for yourself. The video pauses about halfway through to specifically highlight Taylor, No. 52, on the sideline.

After Derek Carr’s first Interception, a 12th player from the Seahawks bench ran onto the field and started blocking ? pic.twitter.com/x4CDDSfdlI

More from RTI: A Look Back at Tennessee’s Transfer Portal Activity One Year Ago

Additionally, the referees for the game did not catch the mistake, nor did the replay booth upstairs. It just simply went unnoticed.

If that’s not the funniest play of the NFL season so far, please, send it to @RockyTopInsider on Twitter. We’d love to see the competition.

As a Volunteer, Taylor had an infamous moment that still stands out in the minds of some Tennessee fans.

If you already know where this is going, enjoy. If you don’t remember, buckle up.

Before the 2016 Battle at Bristol matchup against Virginia Tech, Taylor delivered a line that would make him a hero to Vol fans for years to come: WGWTFA.

Darrell Taylor has had quite a memorable career with some hilarious moments.

On the season, Taylor has a total of 13 total tackles, three sacks, and three forced fumbles, which is good for T-2nd in the league.

For more on VFLs in the NFL, check out Rocky Top Insider’s latest round-up here.