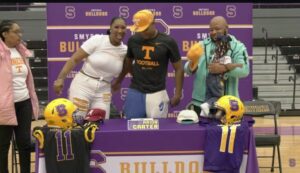 Tennessee early enrollee linebacker Arion Carter has been named the 2022-2023 Gatorade Football Player of the Year from the state of Tennessee. The newest Volunteer brings home the award as Smyrna High School’s first-ever recipient of the award.

“The 6-foot-1, 210-pound senior linebacker and running back led the Bulldogs to a 10-2 record and the second round of the 6A playoffs,” Gatorade’s official announcement stated. “Carter, who was named 6A Mr. Football, rushed for 1,184 yards and 19 touchdowns on 185 carries (6.4 yards per carry) and also registered a team-high 92 tackles with three sacks, three forced fumbles and an interception.”

Gatorade’s press release also points to an impressive 3.96 GPA in the classroom and a willingness to serve at local charity events for Carter.

“The award, which recognizes not only outstanding athletic excellence, but also high standards of academic achievement and exemplary character demonstrated on and off the field, distinguishes Carter as Tennessee’s best high school football player,” the press release states.

Arion Carter announced his collegiate decision on Dec. 14, a week prior to the start of the early signing period in December. Carter committed to Tennessee with his family next to him standing in front of a packed Smyrna High School gymnasium.

Despite being a late riser in the 2023 recruiting cycle, Carter was a much-needed pickup for Josh Heupel and Tennessee. As a four-star in-state linebacker, Carter is the exact type of promising young recruit that can help Tennessee quickly grow on the defensive side of the ball. According to 247 Sports, Carter comes in as the No. 159 player in the class, the No. 13 linebacker in the country, and the No. 2 player from the state of Tennessee.

Edge rusher Caleb Herring, the No. 1 player from the Volunteer State, is also a Tennessee early enrollee.

Tennessee beat out Alabama for the commitment from Carter, who is already on campus and in the Tennessee facility as one of the Vols’ 15 early enrollees last month.

“Arion is super athletic, smart and competitive,” head coach Josh Heupel said about Carter on signing day. “He’s one of the most mature guys that I’ve gone through the process with, just with what he was looking for and the questions that he asked every time that we had a conversation. He pays attention to details. You can notice that by the questions he’s asking about a previous game that we played and also by the way that he prepared for the games that he was going to play. That linebacker position is somewhere that we had to add a bunch of guys to depth-wise. I’m proud of the recruitment of Arion. That was big for us as a program. To get two of the top players inside the state and guys that will be able to help us for a long time is important.”

Carter will now be entered into the Gatorade National Player of the Year sweepstakes, which will be announced later in the month of January.