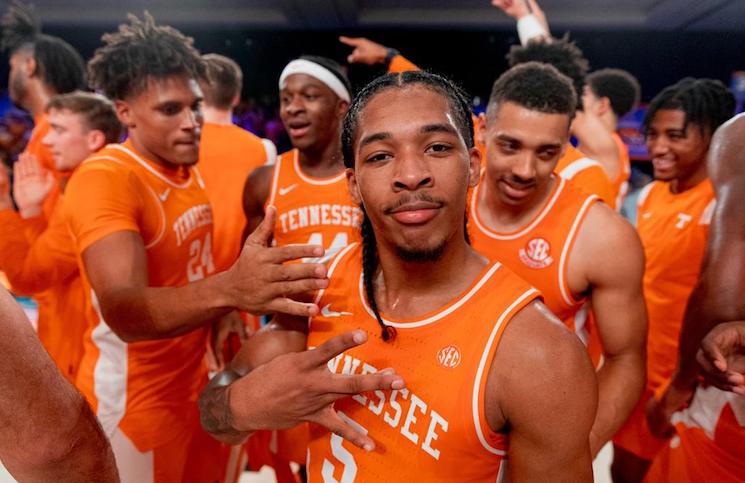 The Vols turned in a 3-0 week in the Battle 4 Atlantis Men’s Tournament, defeating Butler, USC and No. 3 Kansas on their way to winning the event. Santiago Vescovi earned tournament MVP and SEC Player of the Week after averaging 13.3 points, 4.3 rebounds and 3.3 assists in the three-game event.

Tennessee moved up nine spots in the poll after improving to 5-1 on the young season. The Vols return to the court Wednesday night at Thompson-Boling Arena where they face McNeese State at 7:15 p.m. ET.

The Vols are one of five SEC teams in this week’s poll joining No. 11s Alabama and Arkansas (tied), No. 15 Alabama and N0. 19 Kentucky. Rick Barnes eighth team in Knoxville also has non conference games scheduled with No. 2 Texas, No. 4 Arizona and No. 22 Maryland.

The Lady Vols fell from No. 23 to out of the poll after a 2-1 week saw them fall to Gonzaga in the final game of the Battle 4 Atlantis Women’s Tournament before blowing out Colorado and Eastern Kentucky. Rickea Jackson had a monster week, averaging 17 points and seven rebounds per game.

Tennessee is off to a 4-4 start to the season with losses to three power five programs and Gonzaga. The Lady Vols return to the court on Sunday when they host Virginia Tech to Thompson-Boling Arena. Tip off is at 1 p.m. ET.

Kellie Harper’s team is No. 31 in the country when including the others receiving votes part of the poll. No. 1 South Carolina and No. 11 LSU are the only two SEC teams in this week’s poll.

Ryan Schumpert is a recent graduate of the University of Tennessee-Knoxville who has covered University of Tennessee athletics since the moment he stepped on campus. Ryan spent three years with the Daily Beacon, the last two of which as the Sports Editor. Ryan also spent three years at Volquest providing strong Tennessee baseball coverage of Tony Vitello’s resurgent program before joining RTI. While the bulk of Ryan’s responsibilities involved beat coverage and writing, he also recorded podcasts for both the Beacon and Volquest. Ryan’s work ethic, versatility, and strong writing skills are but three reasons why Vol Nation will be hearing from Ryan for years to come.