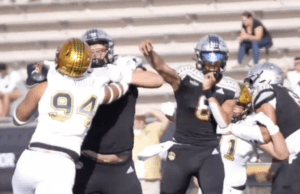 In his final performance prior to the start of his career in Knoxville, Tennessee quarterback Nico Iamaleava dazzled the spectators in Hawaii during the Polynesian Bowl on Friday night.

The Tennessee freshman early enrollee was the starting quarterback for the Mauka squad and was named the Polynesian Bowl Offensive MVP after the game.

While only playing the first half of the game, Iamaleava finished with 186 passing yards, one touchdown, and one interception on 13-of-20 passing. Iamaleava also added in five rushes for 65 yards including one major breakout run down the sideline in the second quarter.

Despite the award at the end of the game, Iamaleava had a start that he would probably want back. Iamaleava tossed an interception during his team’s first offensive possession, which can be somewhat excused considering the lack of familiarity between these players in this “all-star game”.

After that, though, the Tennessee quarterback locked in.

On the very next offensive drive, Iamaleava connected with USC wide receiver Zachariah Branch for a big touchdown down the middle of the field. While Branch did have a great catch and run on the play, Iamaleava delivered a pinpoint strike across the middle.

More from RTI: How Josh Heupel Was Graded for the 2022 Tennessee Football Season

During Team Mauka’s next drive, Iamaleava found some running room down the field and broke open an impressive 58-yard run. Iamaleava went out of bounds just a few yards away from the endzone but got close on the dash down the field.

With less than 30 seconds until the end of the half, Iamaleava was back on the field to lead his team for a quick drive. Iamaleava set his feet and launched an arching pass down the left sideline which perfectly connected with five-star tight-end Duce Robinson for a massive gain.

Nico Iamaleava was named the offensive MVP after the game.

Iamaleava enrolled at Tennessee on Dec. 16, 2022, and was present for the Vols’ Orange Bowl workouts and practices leading into the game. With the Polynesian Bowl now in the rearview mirror, though, Iamaleava will return to Knoxville and completely turn his attention to his freshman season with the Volunteers.