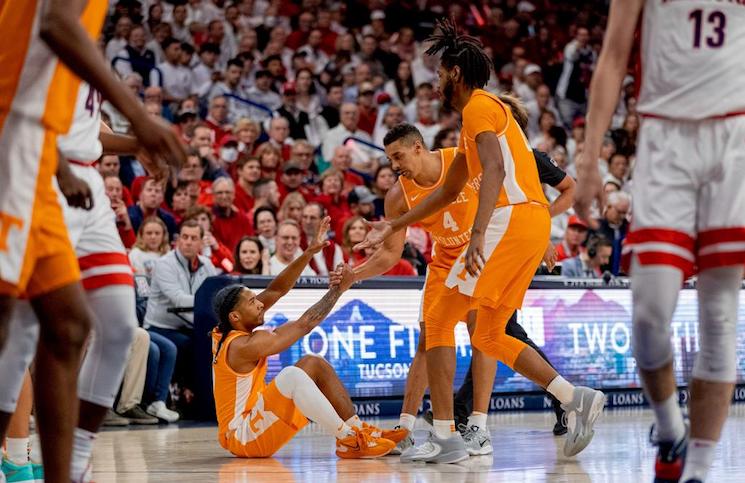 It’s almost conference play time in basketball season now that the calendar year is drawing to a close. Through nearly two months of the 2022-2023 season, several SEC teams have played at a high level, with six southeastern squads cracking the latest edition of the AP Top 25 poll.

Tennessee leads the group, coming in at No. 7, one spot ahead No. 8 Alabama and two spots ahead No. 9 Arkansas. The Vols and the Tide are each 10-2, with Tennessee’s best wins coming against (then) No. 3 Kansas and No. 13 Maryland. Alabama has defeated a No. 1 team twice in North Carolina and Houston and has beaten an at the time Top-12 squad in Michigan State and a physical Memphis team. Both Tennessee and Alabama have a ranked loss, with the Vols falling to Arizona and Alabama coming up short against Gonzaga. The Tide also lost to UConn who has since soared up to No. 2 in the college basketball ranks.

Arkansas is one game better than Tennessee and Alabama, going 11-1 in their first 12 games. But the Razorbacks’ strength of schedule is far weaker, which is the clear reason for the Hogs’ ninth overall ranking. Arkansas’ best win is against San Diego State in the Jim Maui Invitational. The Aztecs were ranked 17th at the time but has since fallen outside the Top-25. Arkansas’s lone loss came to Creighton in the same tournament.

Moving down the Top 25, the remaining SEC teams file in with the trifecta of Kentucky, Auburn and Mississippi State ranked 19-21. Kentucky has gone 8-3 in their tough 11-game stretch to open the season, with losses coming against ranked teams UCLA and Gonzaga along with falling to Tom Izzo’s Michigan State.

Bruce Pearl’s Tigers are 10-2 to begin the season, having lost to Memphis and USC, who Tennessee beat in overtime in the Battle 4 Atlantis. Auburn has no ranked wins on the year thus far.

Mississippi State started red-hot, winning their first 11 games before losing to Drake in their final non-conference game. Like Auburn, the Bulldogs have no ranked wins on the season.

Missouri and LSU join Mississippi State and Arkansas as 11-1 teams in the SEC, but neither team has cracked the Top-25, yet. Missouri’s best win came against Illinois while LSU has glided through an incredibly easy non-conference slate other than a loss to 11-1 Kansas State.

Below is a full look at the SEC Standings before conference play officially begins on Wednesday night.