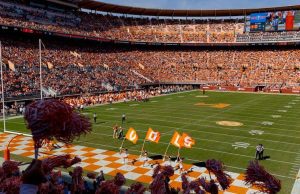 Tennessee looks to continue the momentum on the recruiting trail after a 7-0 start to the season. Photo By Andrew Ferguson/Tennessee Athletics.

With Tennessee hosting a gigantic number of recruits for the game against Alabama in Knoxville earlier this month, the Vols have certainly been trying to parlay their success on the gridiron into success on the recruiting trail.

And, for the most part, it looks to be working.

Starting on the Sunday after Tennessee’s win over the Tide, the Vols have hauled in two commitments to the class of 2024 in wide receiver Mazeo Bennett and cornerback Kaleb Beasley. Both players are talented young recruits that are oozing potential at the next level.

However, as Tennessee continues to build excitement in the class of 2024, the Vols are still looking to close down the class of 2023 with a bang. Led by five-star quarterback Nico Iamaleava, Tennessee’s 2023 recruiting class is sure to make an instant impact when they arrive in Knoxville later in the winter and the spring.

Since his arrival as the head coach on Rocky Top, Josh Heupel has been transforming the identity of Tennessee football into one that is fast, fun, and real. And recruits are starting to notice. Just last week, class of 2024 athlete Jacob Oden told Rocky Top Insider that his visit to the Tennessee-Alabama game was some of the most fun he had ever had on a college visit.

On the offensive side of the ball, recruits are seeing how successful they have the opportunity to be in an offense conducted by Heupel.

“If anybody, as far as recruits, if you want to come to a program where you’ll get the ball, you spread it out, [Tennessee] is the place for you,” wide receiver Jalin Hyatt said earlier this year.

On the defensive side of the ball, Tennessee boasts elite coaching and a waiting line that is far shorter than some of the other top schools in the nation. Defensive coaches Rodney Garner and Willie Martinez have already shown an ability to get Tennessee players into the NFL with Matthew Butler, Alontae Taylor, and Theo Jackson, too.