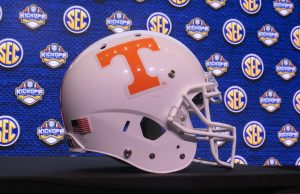 There are seven SEC teams in the AP Top 25 heading into week nine of the college football season.

Georgia, Alabama, and Tennessee have been holding down the top spots from the conference over the last few weeks. However, ever since Tennessee’s win over Alabama in Knoxville, the Vols have been coming in as the SEC’s second-ranked team over the Tide.

Behind those three is Ole Miss, who barely retains its fourth-highest ranking among SEC competition after the Rebels’ loss to LSU on Saturday. The Tigers, unranked at the time, drummed the then-Top 10 team to the tune of 45-20 in Death Valley.

After that win, LSU jumps all the way up to No. 18. The Tigers have been in the Top 25 before this season and were even ranked right at No. 25 heading into their home matchup with Tennessee. However, with the Vols entering town that week, that ranking didn’t last long.

Now, though, the Tigers are back in the rankings and suddenly look like one of the hotter teams in the SEC.

Fresh off a bye week, Kentucky stays put with its No. 19 ranking. Mark Stoops’ squad will now travel to Knoxville as the Wildcats seek revenge following Tennessee’s win in Lexington last season.

And lastly, after rattling off four straight wins, the South Carolina Gamecocks come in as the caboose of the AP Top 25 rankings.