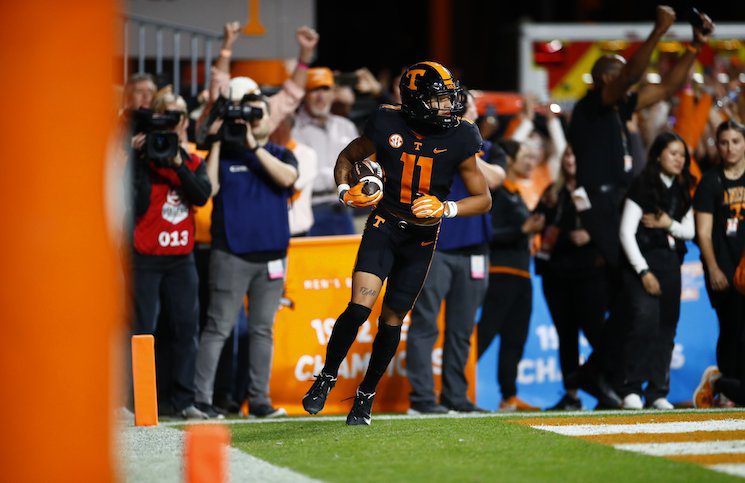 The deadline for college players to declare for the 2023 NFL Draft is past. As NFL teams begin preparing for this spring’s draft, mock draft season is heating up.

In addition to the seniors that were out of eligibility, receiver Jalin Hyatt and offensive tackle Darnell Wright declared for the 2023 NFL Draft and the duo perhaps are the two most sought after draft prospects from Tennessee.

Hendon Hooker, Cedric Tillman and Byron Young are all likely to get drafted in the seven round draft while Jeremy Banks could hear his name called too.

CBS Sports projects only one Tennessee player to be selected in the first round of the draft and that’s receiver Jalin Hyatt.

The mock draft has the Baltimore Ravens selecting Hyatt with the 23rd pick in the 2023 NFL Draft.

“Not every wide receiver is an ideal fit for the AFC North franchise.,” CBS’s Josh Edwards wrote. “The Ravens need another wide receiver with the capabilities of Rashod Bateman. They need a vertical threat with some size.”

Baltimore would be an interesting landing spot for Hyatt due to the uncertainty surrounding Lamar Jackson’s future. Jackson is not under contract past the 2022-23 season and things appear rocky between the former MVP quarterback and the Ravens after Jackson asked for a fully guaranteed contract and spent much of the second half of the season nursing a knee injury.

But Hyatt is the type of receiver that could thrive with Jackson in Baltimore’s offense. Fast, big play receivers have thrived with Jackson including former Oklahoma receiver Hollywood Brown.

Hyatt’s speed and big play ability was well on display in his breakout junior season. The 6-foot receiver outpaced most SEC foes in big plays on his way to posting a 67 catch, 1,267 yard and 15 touchdown season.

The massive numbers helped Hyatt earn All-SEC and All-American honors in addition to being the first Tennessee receiver to ever win the Biletnikoff Award.

Hyatt’s crowning achievement in Knoxville will always be his 207 yard, five touchdown performance in the Vols’ first win over Alabama since 2006.